The Nobel Prize is an annual award that is designed to acknowledge some of the greatest achievements by humanity. It’s also one of the oldest ceremonies of its kind with the first set of titles being announced in 1901 and in the modern day, Nobel Prizes are considered to be the pinnacle of achievement in their designated categories.

The Nobel Foundation was formed by Alfred Nobel and his family in 1900. Alfred Nobel was a Swedish scientist who invented dynamite and was the driving force behind the set of awards that was instigated a year later.

Fast forward over one hundred years and like most awards ceremonies, there is an active set of betting markets attached to Nobel Prizes. Awards are made at the end of each year and there is plenty of time left for speculation but the markets are open and there are some interesting ante post prices available so let’s get straight on and see what options we have.

The Nobel awards began at the start of October 2019 and for those involved, this is, perhaps, the greatest endorsement of their work. Recognition in the fields of medicine, literature and much more will be issued over the next few days but for the wider viewing public, one section stands out above all of the rest.

The Nobel Peace Prize is the most famous of all the awards that use this name. It’s been won by some hugely influential people over the years but in 2019, it may just hold even greater significance. The efforts of teenage activist Greta Thunberg have captured the world’s attention and the young Swede has been installed as the hot favourite to win.

We’ll take a look at the 2019 betting market right now but if you want a quick refresher course, just scroll to the Peace section where you can find out a little more about the history along with a list of some recent winners.

The betting market for the Nobel Peace Prize 2019 shows Greta Thunberg to be way ahead of the chasing pack. The teenager is as short as 1/2 with Ladbrokes and SportingBet and it’s felt in many quarters that she is a certainty for the award.

If you’ve somehow missed the news over the last few months, Greta Thunberg is a 16 year old environmental activist who has shot to prominence in a very short space of time. She only really became active in 2018 when she organised a notorious school strike but in less than 12 months, she built a following of millions around the world.

Thunberg speaks out on climate issues in particular and she seems an obvious candidate to win the award this year. The only question that some might pose concerns the theory that her views aren’t directly linked to peace. Yes, she’s looking to steer our planet in the right direction and, while she splits opinion, we think she should be lauded for that. However, is Greta Thunberg looking to stop conflict and isn’t this what the Nobel Peace Prize is actually about? 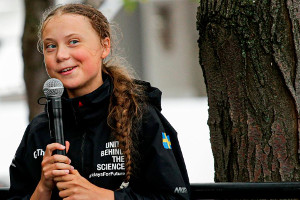 Behind Greta Thunberg, we have a sizeable gap before we get to the remaining candidates for the 2019 Nobel Peace Prize. Abiy Ahmed is next on the list at best odds of 6/1 with SportingBet and then we get to Raoni Metuktire at a top price of 9/1 with Ladbrokes.

Ahmed is the current Prime Minister of Ethiopia while Metuktire is a veteran activist at the other end of the age scale from Greta Thunberg. Next up we have the Prime Minister of New Zealand – Jacinta Ahern – who is quoted at best odds of 9/1 with Ladbrokes. Ahern will be particularly remembered for her stoicism in the wake of the Christchurch attacks and she may be worth an outside punt at that price.

From there, we move out once again and we find a host of options all listed at a top industry price of 20/1. Ladbrokes are quoting that figure for UNHCR, The Arctic Council and Hajer Sharief while Unibet have that same 20/1 price available for Angela Merkel.

Also at 20/1 with Ladbrokes are the International Land Coalition and the International Rescue Committee. It’s not unknown for organisations to win the Nobel Peace Prize so we certainly shouldn’t rule out any of these names.

As with any non-sports market, we often see a host of very unlikely names thrown into the mix and the Nobel Peace Prize is no exception. Edward Snowden seems a punt at 33/1 with Unibet but some of the options are far more implausible.

Around a year ago, many were suggesting that Kim Jong Un and Donald Trump would share an award but that seems like a distant prospect in the present day. They are here individually however – Trump is at 25/1 with Unibet while Kim Jong Un is quoted at 100/1 with Unibet again. Interestingly, the North Korean leader is as short as 25/1 with Ladbrokes but we wouldn’t advise on getting involved.

Elsewhere, British politics is going through a turbulent time right now and some of the country’s most prominent names are on the list. Jeremy Corbyn and Theresa May are both on offer at 100/1 with SportingBet while the current Prime Minister, Boris Johnson, is also at 100/1 – this time with Ladbrokes.

Once again, we suggest avoiding those names but who are we backing for the 2019 award?

In all honestly, we cannot see anybody catching up with Greta Thunberg in 2019. There is that question of whether peace is her main goal but it would be a huge statement for the Nobel Foundation to present her with the prize and we feel certain that they will follow through.

There are no each way markets of course but we could make a case for putting a small stake on either Raoni Mektuktire or Jacinda Ahern. However, if you like your profits to be on the lower side, it looks to be a case of Greta Thunberg all the way.

The category that tends to get most media recognition is the Nobel Peace Prize. It’s an award that can resonate with all human beings on the planet and obviously there have been some very notable winners over the years.

US Presidents tend to feature with Barack Obama and Jimmy Carter two of the most recent winners while Nelson Mandela, Kofi Annan, Mikhail Gorbachev and Yasser Arafat have all taken the award since 1990. So, in a world that some believe is on the brink of a global conflict, who is in the frame for 2018?

Amidst a quiet set of markets, you can usually rely on Paddy Power to make light of this award and among a number of President Trump specials, the bookie has odds of 25/1 on Trump and Vladimir Putin to jointly receive the Nobel Peace Prize.

Beyond that, there is a host of Trump specials from Paddy including a market to decide who has the biggest Nuclear Button – the United States or North Korea. However, as far as the Nobel Peace Prize is concerned, that is your only option so far.

We mentioned that it’s early to be speculating on any Nobel Prize category but one area where there is a busy, and sensible set of prices, is in the world of literature. The declaring set of bookmakers comprise quite a small list as of January 2018 but this is where the good prices start to come in.

The favourite at the time of writing is NgugiWaThiong’o, a veteran Kenyan writer who is available at odds of 5/1 with both EnergyBet and Ladbrokes. NgugiWaThiong’o is 80 this year and famously spent 22 years in exile as a result of his political work but is happily restored and still very active in the world of literature despite his advancing years.

Second favourite right now is Haruki Murakami who is available at a top price of 8/1 with EnergyBet and Ladbrokes once again. At 69, Murakami is another vastly experienced writer with a big body of work behind him and he has won a host of other writing awards, notably the Franz Kafka Prize in 2006.

With bestsellers in his native Japan, alongside millions of sales worldwide, he looks to be a strong challenger to the market leader.

In third place at 10/1 with Ladbrokes and EnergyBet is Margaret Atwood, the Canadian poet and novelist who was first published way back in the early 1960s. Behind these three, the market starts to thin out.

As far as the bookmakers are concerned, there are eight names in contention for the Nobel Prize for Literature. Behind the three that we’ve already mentioned, Javier Maras, Philip Roth and Ko Un are all available at 16/1 with Ladbrokes and EnergyBet while Martin Amis and Salman Rushdie can be picked up at 50/1 with the same two bookmakers.

In all five cases, this isn’t necessarily set to be the most active 12 months for the individual authors in question but the award does also take an element of longevity into account so we certainly shouldn’t be ruling anyone out at this stage.

There are six Nobel Prize categories in total and along with the two that we’ve considered – Peace and Literature – awards are given for Physics, Chemistry, Medicine and Economic Sciences.

As of January 2018, there are no markets for the remaining four and while this may change, we don’t expect too many bookmakers to cover the more obscure of those categories. We should, however, see more outlets getting involved with Peace and Literature in the months that lie ahead so you could hang on to see who else declares or, you could take advantage of some of the excellent prices that are already out there.

We’ll leave the President Trump markets to one side for now because, while there is some remote possibility that the Peace prize is within his grasp in the future, it’s unlikely to happen in 2018 and there are more pressing options to consider at the moment.

Therefore, with other markets still to come in, we’ll focus for now on the prize for literature which has a number of nicely priced nominees. Much could depend on what happens in terms of sales and new, published work in the weeks and months that lie ahead but we have a very logical favourite at the head of the betting.

NgugiWa Thiong’o’s story is an incredible one as an author and political exile but there is no hint of a sympathy vote here. At the age of 80, he has a long body of work behind him despite that exclusion that saw a barren period of 20 years.

Sales of his work back up his position as the market leader so this is one bet where we aren’t going to argue with the bookmakers and would therefore suggest the following tip for this year’s Nobel Prize Awards.